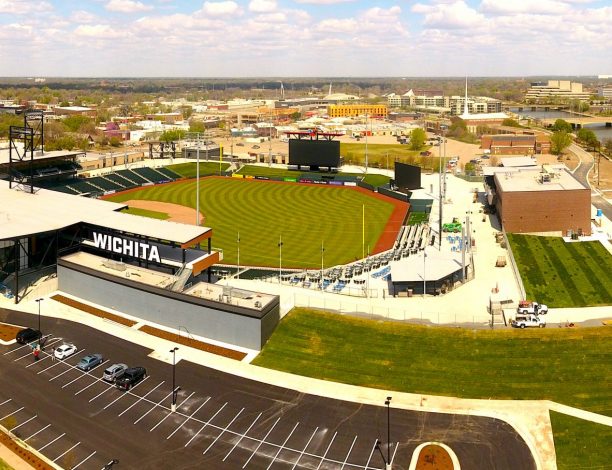 This Design-Build project was built by an Eby Construction – JE Dunn joint venture along with an all-star design team which included SJCF Architects, DRL Group and Professional Engineering Consultants. To meet the contract deadlines established by the City of Wichita, this $75 Million stadium, with capacity for 10,000 people, had to be designed and built at a blinding pace of just 16 months!

The pace of design and construction was unlike any project of this size in Wichita. To accommodate such a quick turnaround, all stakeholders were required to be in weekly design meetings. This included members of the minor league baseball team, city officials, code officials, engineers, architects, and the construction team. Key decisions had to be made swiftly as design was completed in phases which were quickly moved to the construction team.

This stadium set a new standard for minor league baseball design as every aspect was given thoughtful consideration. Sight lines were improved, locker rooms were enlarged, suites were made more comfortable, and options for guest experiences were expanded, just to name a few. In addition, special attention was paid to the interface between the stadium and Wichita’s downtown. The rooftop terrace in right- center field is one example. Fans hanging out there have a fantastic view of the river and Wichita’s skyline.  If they’re lucky, they might even catch a glimpse of Wichita State’s rowing team moving downstream.

The rooftop terrace sits atop a building that houses the team’s administration offices and a soon-to-be baseball museum that will open 2021. In that building at street level is a remote radio broadcast booth with windows that open to the public.

The new Riverfront Stadium Ballpark is a tribute to Wichita’s storied history in baseball and a will be home to the Wichita Wind Surge, an American Minor League Baseball team of the Pacific Coast League and the Triple-A affiliate of the Miami Marlins. Additionally, the stadium will host outdoor concerts, festivals, community and family-friendly events.

Where It All Began

Eby Construction was founded in the midst of The Great Depression. Against the odds, we grew immensely in the following decades.